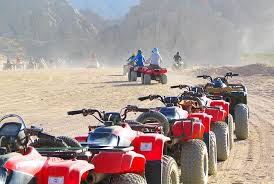 Association of British Travel Agents (ABTA), a UK travel trade association for tour operators and travel agents issued a warning to all the British holidaymakers to think twice before hiring mopeds and quad bikes especially in desert regions.

The travel association has launched a campaign advising travellers and giving them proper information about moped or quad bike operations.

Last week 19-year-old Kieran Roche from Swindon died after a quad biking accident at the resort of Malia on Crete. Three other British holidaymakers, all women, were severely injured last month in quad bike accidents on another Greek island, Zante.

Melanie Simmonds, now 32, suffered serious injuries in a quad bike accident in Greece in 2010, and underwent a series of operations over 14 months.

Since December 2017, four British travellers have been killed or maimed as a result of moped crashes in Thailand. ABTA estimates that one in 10 British holidaymakers hires a moped or quad bike whilst overseas – a total of 4.5 million. For UK travellers between 18 and 24, the figure is one in seven.

In recent years, quad bikes have become increasingly popular in Turkey and on the Greek islands, while hiring mopeds is now common among British travellers to Thailand and Vietnam.

Nikki White, the association’s director of destinations and sustainability, said that every year people suffer serious injuries after hiring mopeds or quad bikes while on holiday.

Sir David Spiegelhalter, professor of the Public Understanding of Risk at the University of Cambridge, calculates that motorcycles are far more dangerous than bicycles, cars or walking. Per mile covered, trains and planes are far safe than other forms of transport.