Port Stephens gets its very own Snapchat geofilter 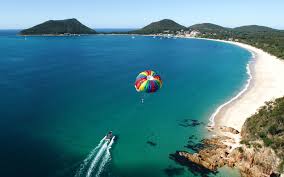 Port Stephens now has its very own geofilter on mobile messaging app, Snapchat, thanks to local design company, Colorfast.The release of the location-based overlay for social media pictures comes just in time for Port Stephens’s annual Naturefest program which showcases the region’s wildlife and scenic appeal, including the passing parade of whales off the Port Stephens coastline. A chief focus of Naturefest is a ‘Shutterfest’ nature photography competition for children and adults.

Snapchat is a mobile app which enables users to send photos to each other which last only for a few seconds. Images can be overlaid with special features and filters. Geofilters allow users to use special graphic overlays only if the user is in a certain location, such as a landmark, city or town.

The brand new Port Stephens geofilter features the popular destination’s name in a cursive typeface, along with a picture of a whale – whale-spotting being one of the many reasons the coastal region is a much-loved holiday destination.

The geofilter was designed by Nadia Parkinson, a graphic designer at Colorfast studios at Salamander Bay in Port Stephens. Parkinson submitted the design to Snapchat in the US which approved it, allowing all Snapchat users to put it on their selfies and nature shots while in Port Stephens.

Destination Port Stephens Chairman Allan Ray described the initiative as exciting. “It’s a great example of Port Stephens innovation”, he said. “It’s also an effective and powerful way for people to share the good times they have here in Port Stephens with others, hopefully inspiring them to come here as well.”

As Snapchat’s main user demographic is millennials, it is expected that both local youth and young people visiting the area will take advantage of the geofilter to take pictures of whales and other wildlife and show their friends how they are enjoying a visit to Port Stephens.The Port Stephens geofilter is now available on the SnapChat app.