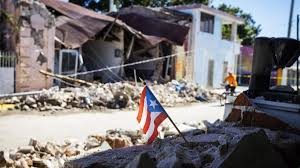 Puerto Rico experienced another earthquake early Tuesday, a 6.4 quake that is the latest in a series impacting the southern part of the U.S. territory. The U.S. Geological Survey said that there were a lot of aftershocks, although an initial tsunami alert for Puerto Rico and the U.S. Virgin Islands was canceled in the hours after the quake.

Damage was mainly in the southern region of the island, including the towns of Ponce, Guánica,  Guayanilla, Mayaguez and Yauco. Detailed reports of damage or injuries were unavailable due to smashed up communications across the island.

Puerto Rican Governor Wanda Vasquez said that there were no immediate reports of loss of life. Government offices are closed and citizens are being urged to stay calm. Power was restored in the affected areas later Tuesday.

The island’s tourism industry has been in a continual state of recovery and resilience from the time when Hurricane Maria hit in September 2017. In the second half of 2019 alone, Puerto Rico faced civil unrest and narrowly missed Hurricane Dorian. Discover Puerto Rico, the island’s destination marketer, said that tourism operations across the island are operating normally after the earthquakes, but advised visitors to check with their travel providers and hotels to see if operations have been affected.