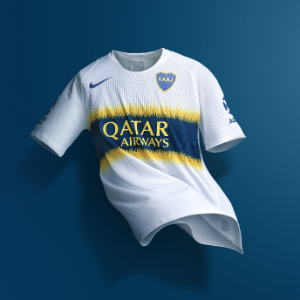 Qatar Airways and Boca Juniors are pleased to reveal the top Argentinian football club’s new jersey, featuring the airline’s logo. The award-winning airline signed an agreement in May to become the official Jersey Sponsor of Boca Juniors through the 2021/22 season.

The Boca Juniors jersey proudly features Qatar Airways’ logo prominently on the front, enabling it to be seen by millions of the team’s fans around the world. This sponsorship agreement also strengthens the airline’s extensive global sporting partnership portfolio.

Qatar Airways Group Chief Executive, His Excellency Mr. Akbar Al Baker, said: “We are delighted to reveal the new Boca Juniors jersey featuring the Qatar Airways logo. As an airline, we are proud to celebrate our strong ties with South America, and our partnership with Boca Juniors further cements our commitment to the continent. Boca Juniors is one of South America’s top football teams, and we are tremendously excited to watch Boca Juniors compete, with our brand represented on the team jersey.”

Boca Juniors President, Mr. Daniel Angelici, said: “We are delighted to present the new jersey with our new main sponsor, Qatar Airways. This strategic partnership is extremely important for both Boca Juniors and Qatar Airways and will allow us to amplify our frontiers. We look forward to succeeding together and to celebrating the many exciting moments to come.”

Qatar Airways has operated daily flights to the capital of Argentina, Buenos Aires, as well as the Brazilian city of São Paulo since 2010. In December 2016, Qatar Airways Group further strengthened these ties through a strategic investment, acquiring a 10 per cent stake in South American LATAM Airlines Group.

Qatar Airways is well-known for championing sport as a means of connecting communities around the world. The agreement with Boca Juniors is just one of many exciting sporting sponsorships the airline has recently added to its extensive sponsorship portfolio. In addition to its existing partnership with the German football club giants FC Bayern München AG, for which it is a Platinum Partner, Qatar Airways also recently revealed a multi-year sponsorship agreement with Italian football club AS Roma, for which it will become the Official Jersey Sponsor through the 2020-21 season.

Qatar Airways flies one of the youngest fleets in the sky, featuring the world’s most technologically-advanced and environmentally friendly aircraft. The airline operates a fleet of more than 200 modern aircraft to a network of more than 150 key business and leisure destinations across Europe, the Middle East, Africa, Asia Pacific, North America and South America.

The airline is continuing its ambitious expansion plans, and will launch a host of exciting new destinations this year, including Tallinn, Estonia; Valletta, Malta; Langkawi, Malaysia and Da Nang, Vietnam.