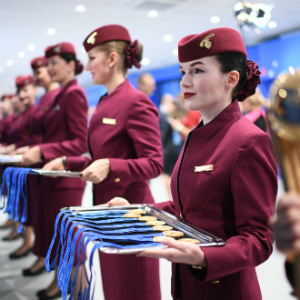 Qatar Airways, an Official FIFA Partner and the Official Airline of FIFA, congratulates France on the outstanding win of the 2018 FIFA World Cup Russia, following a month of football excitement in Russia. The tournament was watched by more than two billion spectators around the world, with more than 250 million views on Qatar Airways’ social media channels. Qatar Airways proudly supported the matches as they unfolded and now prepares to look ahead to the thrilling prospect of the 2022 FIFA World Cup Qatar.

The 2018 FIFA World Cup Russia was a thrilling competition, bringing people together through the shared love of football and sports and Qatar Airways took its celebration to the skies prior to the tournament’s semi-final and final match by flying a hand-painted Boeing 777 aircraft in FIFA livery to Moscow. The bespoke aircraft was hand-painted in Ireland and showcases just one example of how the World’s Best Airline has committed itself to this important partnership, one of the biggest sporting sponsorships in the world, alongside dedicated fan-zones showcasing true Qatari hospitality.

Qatar Airways Group Chief Executive, His Excellency Mr. Akbar Al Baker, said: “I would like to congratulate France on the win against Croatia. As a global airline, we could not be more proud to be part of this huge sporting event that has brought the world together though a shared love of football and sport. We are truly inspired by the excitement this tournament has created, and by the tremendous enthusiasm shown by fans around the world at each and every match.”

Qatar Airways Senior Vice President Marketing and Corporate Communications, Ms. Salam Al Shawa, said: “The 2018 FIFA World Cup Russia has been both exciting and inspirational, as it has brought people together from all around the world to cheer for their teams and celebrate their love of football. We now look forward with tremendous anticipation to 2022, when the tournament will be hosted in our home country, Qatar. As the national carrier of the State of Qatar, we could not be more proud as we prepare to welcome fans to our home and host city, Doha.”

Qatar Airways kicked off its celebration of the 2018 FIFA World Cup in June by teaming up with singer and TV star Nicole Scherzinger for a re-recording of the classic song ‘Dancing in the Streets’, which resulted in an upbeat and infectiously fun-filled ‘musical’ style TV commercial. The song expresses the airline’s firm belief that sports is a universal language, which has the power to inspire and encourage people to follow their dreams and has a reach of more than 238 million people through social media and an anticipated broadcast reach on television stations around the world of 3.3 billion viewers.

In December 2017, Qatar Airways launched daily services to the cultural capital of Russia, St. Petersburg, doubling the number of Russian routes operated by the carrier. The addition of St. Petersburg to Qatar Airways’ route map demonstrates the importance of the Russian market to the carrier, which has been flying to Moscow since 2004. The award-winning airline currently operates three daily flights between Moscow and Doha, in addition to a daily flight between St. Petersburg and Doha.

In May 2017, Qatar Airways announced a groundbreaking sponsorship deal with FIFA, which saw the award-winning airline become an Official FIFA Partner and the Official Airline of FIFA through 2022. The partnership, one of the biggest sporting sponsorships in the world, gives Qatar Airways extensive marketing and branding rights at the 2018 and 2022 FIFA World Cups, respectively hosted in Russia and Qatar, with an expected audience reach of more than two billion people per tournament.

The award-winning airline has recently added many exciting sporting sponsorships to its extensive sponsorship portfolio. As part of a newly enhanced three-season deal with Formula E, announced in Doha in January this year, the airline was the title sponsor of the Qatar Airways New York City E-Prix, which took place on 14-15 July 2018.

Qatar Airways flies one of the youngest fleets in the sky, featuring the world’s most technologically-advanced and environmentally friendly aircraft. The airline operates a fleet of more than 200 modern aircraft to a network of more than 150 key business and leisure destinations across Europe, the Middle East, Africa, Asia Pacific, North America and South America.