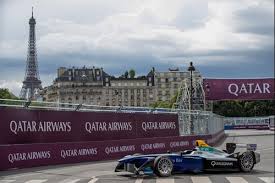 Qatar Airways is pleased to join the ABB FIA Formula E Championship in the Big Apple this weekend as the Official Race Title Sponsor for the double-header season finale, the 2018 New York City E-Prix, taking place in Red Hook, Brooklyn on 14 and 15 July. This is the second year the airline has partnered with the New York City E-Prix.

Set against the iconic Manhattan skyline and the Statue of Liberty, the Formula E races will be held at the Brooklyn Cruise Terminal, featuring an even longer track than last year, spanning 1.52 miles.

Qatar Airways Group Chief Executive, His Excellency Mr. Akbar Al Baker, said: “We are delighted to celebrate the highly-anticipated finale of the Formula E races in New York City, following the exhilarating races that we proudly supported earlier this season in Paris, Rome, and Berlin. Our partnership with Formula E has been tremendously successful thus far, showcasing our shared belief for delivering both excellence and innovation via technologically-advanced products. We look forward to continuing our shared vision with Formula E.”

Founder and CEO of Formula E, Mr. Alejandro Agag, added: “It’s thrilling to be hosting the season finale double-header of the 2017/18 ABB FIA Formula E Championship in New York City, with Qatar Airways being the title sponsor for such an electrifying weekend of wheel-to-wheel racing. We have travelled across 10 cities and five continents this season, and I’m thankful for the support Qatar Airways has given us in going places together.”

Earlier this year, the airline extended its highly-successful association with the ABB FIA Formula E Championship, serving as the Official Airline Partner for the inaugural CBMM Niobium Rome E-Prix presented by Mercedes EQ on April 14, the BMW i Berlin E-Prix on May 19, and as the race title sponsor of the Paris E-Prix on April 28.

The ABB FIA Formula E Championship is the world’s first fully-electric single-seater racing series, competing on the streets against the backdrop of some of the world’s most iconic cities, including Hong Kong, Rome, Paris, and New York City. The championship represents a vision for the future of the motor industry, serving as a platform to showcase the latest innovations in electric vehicle technology and alternative energy solutions.

Recognised as a leader in innovation and technology in the aviation industry, Qatar Airways proudly flies one of the youngest fleets in the skies. In February, the airline was the global launch customer for the A350-1000, the newest member of Airbus’s wide-body aircraft portfolio. The technologically-advanced aircraft offers lightweight carbon composite design, which allows for lower fuel consumption and carbon emissions per passenger.

The award-winning airline has received a record number of accolades in recent times, including ‘Airline of the Year’ by the prestigious 2017 Skytrax World Airline Awards, which was held at the Paris Air Show. This is the fourth time that Qatar Airways has been given this global recognition. In addition to being voted Best Airline by travellers from around the world, Qatar’s national carrier also won a raft of other major awards at the ceremony, including ‘Best Airline in the Middle East’, ‘World’s Best Business Class’ and ‘World’s Best First Class Airline Lounge’.