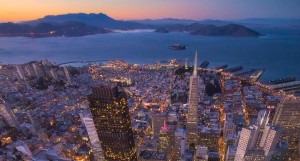 In 2015, the 24.6 million visitors brought $9.3 billion in spending to San Francisco. Visitors directly spent $8.5 billion in the city, up 3.4 percent from the previous year. An additional $723 million was spent by meeting planners and exhibitors for goods and services for their meetings. For the year, total spending in San Francisco related to meetings and conventions reached $2 billion.

The tourism industry generated $738 million in taxes and fees for the City of San Francisco, up 12.8 percent from the previous year. Major contributors to that figure include hotel tax (54.7 percent) and property tax (23.4 percent).

Visitor spending equated to $25.4 million daily or $1.1 million per hour.
On a per capita basis, visitors spent $10,951 per San Franciscan. Visitors generated $2,025 in taxes per San Francisco household.

The above data pertains only to visitors to San Francisco. For the first time, San Francisco Travel’s research also includes the city of San Francisco and Bay Area regional markets including Marin County, the Peninsula and San Francisco International Airport.

The Port of San Francisco hosted 82 ship calls and 297,504 passengers in 2015. In addition to passengers, each ship has approximately 1,000 crew members. This is a record number of passengers, breaking the previous high mark of 256,410 set in 2014. Based on passenger, crew, and ship expenditures, the overall economic impact to the Bay Area of a cruise ship call in San Francisco is approximately $1 million.

“These record-breaking numbers once again prove that tourism is the most important industry in San Francisco. The 24.6 million visitors and $9.3 billion in spending create jobs and support services for people throughout the city and the entire Bay Area,” said Joe D’Alessandro, president and CEO of San Francisco Travel. “We are experiencing sustained growth in all market segments – domestic, international, leisure and business – as a result of our highly professional and sophisticated community of hotels, restaurants, cultural organizations and SFO, one of the finest airports in the world,” he added.

The San Francisco Travel Association is a private, not-for-profit organization that markets the city as a leisure, convention and business travel destination. With more than 1,500 partner businesses, San Francisco Travel is one of the largest membership-based tourism promotion agencies in the country.

San Francisco Travel also operates Visitor Information Centers at Hallidie Plaza, 900 Market Street at the corner of Powell and Market streets and on the lower level of Macy’s Union Square.