Swiss airline to resume its services two weeks after crash 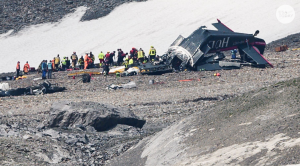 JU-Air plans to resume flying on August 17, two weeks after one of its small vintage planes crashed in the Swiss Alps with the loss of all 20 people aboard.

The crash occurred on Saturday when one of the airline’s midcentury JU-52 aircraft went into a nosedive on the west side of the Piz Segnas Mountain in the canton of Grissons.

The cause of the incident which occurred hours after a family of four was killed when their small plane went down further west in the Alps — remains under investigation and could take weeks or months to determine. The effort is complicated by the vintage plane’s lack of a “black box” flight recording device.

The Federal Office of Civil Aviation said that so long as there is no firm suspicion of a technical defect, it cannot order the grounding of the airline’s fleet.

The airline would need to ensure its crew and maintenance staff were psychologically fit for flight, the federal office warned, adding it would take additional measures, including issuing a temporary flight ban if necessary, should pertinent information surface meanwhile.

The plane hit the ground nearly vertically and at high speed, authorities determined. It was heading north past the Martinsloch rock window, when — instead of flying over the ridge — it made a sharp curve and suddenly tilted into a nosedive, an eyewitness said.