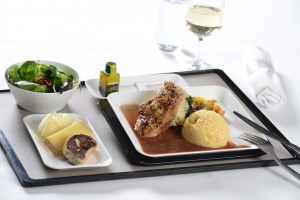 International Air Lines will be offering its premium long-haul guests culinary delights from Switzerland’s Jura region for the next three months. The latest chapter in the award-winning “SWISS Taste of Switzerland” inflight catering concept showcases creations from the Hôtel-Restaurant du Cerf in Sonceboz.

The Jura region will also be highlighted in the latest “SWISS Traditions” feature, which will focus on the local “Marché-Concours” festival between 3 and 16 August.
SWISS First and SWISS Business travellers on long-haul services from Switzerland will enjoy a taste of the country’s Jura region for the next three months. Between 1 June and 30 August, these premium customers will be offered local food specialities inflight from the Hôtel-Restaurant du Cerf in Sonceboz in this beautiful region which is also famed for its watchmaking tradition. In charge at the Cerf for the last 15 years has been Jean-Marc Soldati, who puts a firm emphasis on top-quality ingredients in all his culinary creations.

SWISS First customers will be able to experience Soldati’s quality simplicity with a saddle of rabbit stuffed with chanterelles and spinach and served with potato gratin and spring vegetables, preceded by a starter of lobster medallions with basil coulis, courgette salad and tomato confit. For SWISS Business travellers Soldati has concocted a fera trout timbale with saffron-marinated vegetable salad, followed by a choice of beef tenderloin with herb crust, red wine sauce, potato gratin and spring vegetables or chicken breast stuffed with spinach and Tête de Moine served with balsamic jus, polenta and ratatouille. A dessert of cherry clafoutis with crème Diplomat makes a fine conclusion to the SWISS Business offering.

These typically Jurassian dishes are accompanied by some top-quality wines from the Neuchâtel area, which is known as the Burgundy of Switzerland for a winegrowing climate that benefits substantially from the region’s three large lakes. Travellers will be offered a selection of fine local reds and whites including a Château d’Auvernier Pinot Noir Barrique 2014 and a Blanc Neuchâtel AOC 2015.