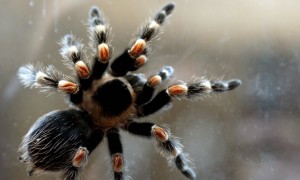 Passengers and crew members in the Air Transat flight from the Dominican Republic to Canada were petrified as two tarantulas roamed aboard causing commotion and panic forcing passengers to stand up on the seats of a moving plane.

The 20 centimeters creepy eight legged stowaways roamed freely on the carpeted cabin after inflight meals were served from Punta Cana a popular holiday resort to Montreal in Quebec.

A passenger wearing skirt found a spider crawling up her leg. She screamed causing panic among other passengers. Her husband managed to catch the spider in a plastic container. The other however could not be traced all through the transit and the crew members advised passengers to put on their shoes and cover their ankles. Canadian air travel authorities do not advocated spraying on exotic species. According to entomologists the tarantula spiders were less venomous and the chances of causing any major damage were minimal. It is believed that someone was carrying them in their luggage to be sold in Canada where the market is lucrative for tarantulas.

Julie Roberts, vice president of Air Transat flight attendant union said that the crew attendants did their best in keeping the passengers calm. Spokesperson Debbie Cabana from the Transat flight said that the cabin crew is trained to ensure safety for the passengers, she said that the case at hand was an extraordinary and isolated event. The staff reacted promptly and efficiently. Last September a passenger on a Qatar Airway flight from Doha to South Africa survived a tarantula bite. By the time the plane landed the leg had turned black and doubled in size.