Tourists to enjoy the White Nights at St. Petersburg 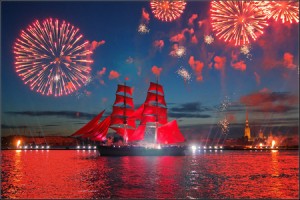 The White Night Festival is one of the longest running International festivals of performing art. The festival occurs during the season of the midnight sun, from mid-May to mid-July. But, the schedule varies. This year, the performances are starting from 23rd May’16 and it would continue till 2nd August’16 at St. Petersburg in Russia.

Not only Russians, but a number of international singers, dancers, actors and performers also join the festival.

The festival is organized by the Saint Petersburg City Administration. Almost every evening, at the Mariinsky Theatre, either opera or ballet performances are organized. The Palace Square gets crowded by international stars during this period. Rolling Stones, Scorpions, Paul McCartney are some of those who performed there in the past. The Scarlet Sails is one of the attractions that people eagerly wait for. This is the oldest event of them all, where a boat lights up with Scarlet radiance and sails by the Neva River.

One can find the schedule for this year’s White Night Festival in the internet. Also, one should check the schedule given in the website before heading towards the festival, as events only occur on selective days. You’ll be able to find the entire schedule along with the performers and the timing of the particular show.