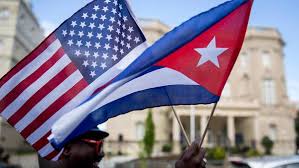 An agreement inked between US-Cuba on Tuesday to resume commercial air traffic between the two countries for the first time in five decades has sent US airlines in a queue to resume flights to Cuba.
New flights could be operating daily by next fall, reports NAM News Network.
U.S. Transportation Secretary Anthony Foxx and Cuban Transportation Minister Adel Yzquierdo Rodriguez signed the deal in a ceremony at Havana’s Hotel Nacional.

According to a press note released by the Foreign Ministry, Alfredo Cordero, President of the Institute of Civil Aeronautics of Cuba, also represented Cuba on the ceremony, while Ambassador Charles H. Rivkin, Deputy Secretary for Economic and Business Affairs of the State Department, also signed for the United States.
The agreement allows 20 regular daily U.S. flights to Havana, in addition to the current 10-15 charter flights a day. The rest would be to other Cuban cities.
U.S. airlines can now start bidding on routes for as many as 110 U.S.-Cuba flights a day – more than five times the current number.
U.S. airlines will have 15 days starting Tuesday to submit route applications to the U.S. Transportation Department and a decision on the winning bidders could be released this summer.
Nearly 160,000 U.S. leisure travellers flew to Cuba last year, along with hundreds of thousands of Cuban-Americans visiting family, mostly on expensive, frequently chaotic charter flights out of Florida.

Commercial flights could bring hundreds of thousands more U.S. travellers a year and make the travel process far easier, with features such as online booking and 24-hour customer service that are largely absent in the charter industry.