UK to be hit by severe Arctic freeze after 58 yrs 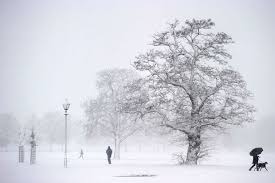 UK will be hit by the worst weather conditions in 58 years causing huge threat to life as serious and hazardous weather situation will cause potential damage to across eight regions in Scotland and North England.

The cold air mass will cover northern Britain and could lead to ice and frozen slush in the snow affected areas of southern Scotland.

Weather conditions are likely to be difficult in Aberdeen and Dundee and travellers have been urged not to go out of their houses unless absolutely necessary.

Cold winds are being driven from Siberia and the North Pole according to experts and creating an Arctic style freezing bring with itself flooding, freezing temperature and very difficult conditions. Severe weather in many parts of the country has disputed normal life.

The signs of the arctic freeze have already been felt as River Don burst its bank and forced residents in Aberdeen to evacuate their homes. Also flight landing was affected in Aberdeen Airport.

The severe weather conditions are likely to spread throughout UK over the weekend.