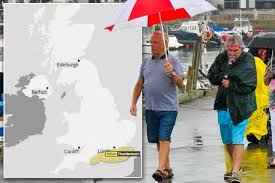 Following weeks of record-breaking temperatures, the Met Office issued a string of warnings for thunderstorms – some of which are the first of their kind in some areas.

Thunderstorms and massive downpours are set to bring a dramatic end to the heat wave on Friday, with the Met office issuing a yellow weather warning amid fears some regions may receive 30mm of rain in just an hour.

Croydon had its first thunderstorm warning today in 164 years. It is also the first time Greater Manchester has received the advisory.

The weather warning is in place from 11am until 8pm and the Met Office suggested there may be some “short term” loss of power and other services, damage to homes and businesses and delays to train services.

The rain will sweep in from the west and become heaviest this afternoon in Wales and south west England.

Aidan McGivern, meteorologist at the Met Office, told the Mirror: “The thunderstorm risk becomes more widespread. Wales and southern England most at risk of some really quite nasty downpours. We could see quite a deluge.

“It can cause some flash flooding in places.

“Some places likely to get a deluge from these showers, but others could miss the rain. It is hit and miss.”

Wimbledon has not yet experienced its annual downpour but its feared rain may dampen the semi-final spirits today when Rafael Nadal and Novak Djokovic are set to clash.

Notwithstanding today’s expected downpours, forecasters said the weather would improve again for the weekend, with temperatures reaching up to 30C in the south or eastern England.