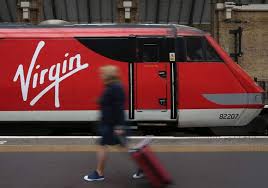 Virgin Trains has been praised by campaigners after becoming the UK’s first train operator to offer a full vegan menu for all its customers on all services.

Passengers can now choose from a range of vegan-friendly options at nearly all times of day following a revamp of its onboard Shop and First Class menus*.

The move, which has been welcomed by the Vegan Society, comes in response to the growing number of people who have chosen to go vegan or simply reduce the amount of meat and dairy in their diet.

As well as ensuring a vegan option is consistently available, Virgin Trains has also clearly labelled its First and Standard class menus to help identify vegetarian, vegan and gluten-free options. And the onboard Shop in Standard and First Class kitchens are now routinely stocked with soya as an alternative to cows’ milk.

Virgin Trains is also working to increase the amount of locally-sourced food served onboard its trains and to include more fresh ingredients in its meals.

Julie Harper, Virgin Trains’ Food & Beverage Proposition Manager, said she was proud to offer vegan customers peace of mind when boarding the train. “The clear message we’ve had from vegan customers is they need consistency so they have peace of mind when they board the train. We’ve worked really hard to ensure that our menus in First and Standard deliver that consistency throughout the day and include some really delicious, appetising options that we hope will tempt vegans and non-vegans alike.”

Louise Davies, Head of Campaigns, Policy and Research at The Vegan Society, said: “We’ve been campaigning for decent vegan options on trains over the last few months and it’s great to see Virgin respond with a menu that anyone can enjoy. Market trends are showing a rapid growth in plant-based eating. We hope that others will follow Virgin’s lead and take notice of the power of the vegan pound.”

Options for vegans in the Virgin Trains Shop currently includes a vegan breakfast pot complete with mushrooms, hash browns, spinach and baked beans, or vegan chilli in the evening. Its First Class menus now include items such as a potato hash breakfast, Mediterranean pasta salad and spicy Bombay potato.