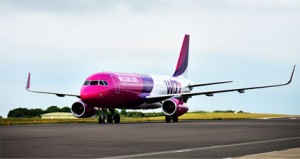 Wizz Air, the largest low-cost airline in Central and Eastern Europe, today announced a new route from Sofia to Birmingham. The route will commence on 28 March and will be operated with two weekly flights on Mondays and Fridays. The new service is Wizz Air’s third low-fare route between Sofia and the U.K. along with London Luton and Bristol.

With this new service, WIZZ is now offering 27 routes to 14 countries from Sofia. Tickets on Wizz Air’s new UK route are already on sale and can be booked at wizzair.com from BGN 79.99*.

Tamara Mshvenieradze, Corporate Communications Manager at Wizz Air said: “We are thrilled to to begin the new year by adding a third U.K. route to Wizz Air’s Sofia network. The new route to Birmingham not only reinforces WIZZ’s commitment to Bulgaria, it also provides an opportunity for our business and leisure travellers to explore the West Midlands on our low fares from only BGN 79.99*. Likewise, our low fares are attracting more visitors to the Bulgarian capital, stimulating tourism and hospitality sectors as well as strengthening business relations between the two countries.”