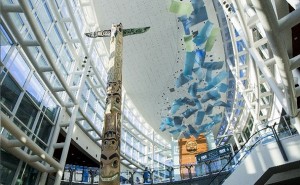 Vancouver International Airport (YVR) was named Best Airport in North America for an unprecedented seventh consecutive year at the Skytrax World Airport Awards in Cologne, Germany. YVR is the first airport in the world to win seven years in a row, breaking the record for consecutive Skytrax awards.

The Skytrax World Airport Awards are based on 13.2 million passenger surveys conducted in 555 airports around the world. The survey measures 39 elements in the airport travel experience including check-in to security and border clearance processes, comfort, efficiency, signage, transportation availability, passenger amenities and friendliness. This is the world’s largest independent airport customer satisfaction survey.

“This is an incredible achievement! Being named the best airport in North America for seven years in a row is a testament to the dedication and hard work of all those in the YVR family,” said Craig Richmond, President and CEO, Vancouver Airport Authority. “I extend a heartfelt thank you to those who voted for us and a huge congratulations to our community, passengers, partners and the 24,000 people who work and volunteer at YVR; you all contribute to our shared success.”

YVR will launch a celebration campaign to thank its employees, customers, community and business partners. Look for details about special events, contests and other activities in the coming weeks.