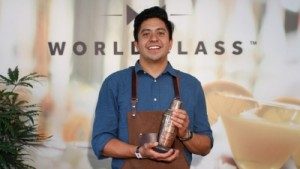 For the mixologists at Fifty Mils, there’s nothing more exciting than being behind the bar, except when there’s a chance to participate another year in one of the most important competitions in mixology: World Class.

Marco Dorantes became the champion of World Class Mexico 2018 with his cocktail Forever Young, making Fifty Mils a winner for the third time and the first bar in the world to get this award three times in a row.

The cocktail that got Marco his victory is a perfect combination of the flavours of smoked grapefruit juice, banana liqueur, stout beer and Bulleit bourbon, and represents according to Marco “the creation of a new way of thinking that prefers to stop worrying about the future and instead wants to believe that everything is possible.”

Since he became part of Fifty Mils in 2016, Marco has always shown great enthusiasm to create experiences worth remembering, from the preparation of each cocktail until the way they are presented, aspects that allowed him to stand out during the competition.

Thanks to this victory, the bar at Four Seasons Hotel Mexico City not only stands as one of the best places where the best mixology is made, but also it keeps its reputation of being a hotspot that every foodie must visit. Marco will have the chance to compete with the 50 best mixologists of the world during the global edition of World Class, in October 2018 in Berlin.

Marco has the duty to keep Fifty Mils’ reputation as one of the best bars in the world, whose bartenders have represented Mexico in the last three years. The results have been very positive. In 2016, Mica Rousseau, Fifty Mils Head Mixologist, finished as the 7th best bartender in the world. In 2017, Fátima León, Fifty Mils bartender, came in 8th place. The Fifty Mils team is certain Marco Dorantes has all the potential and the needed means to make Fifty Mils stand out. In his own words: “I don’t see it as a burden, because I feel the support of my friends and Mexico. With that, I have all the will to win.”