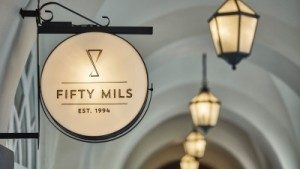 Since its creation, the aim of Fifty Mils was to show the new face of Four Seasons Hotel Mexico City and reflect through its menu the moment in which Mexico lives, that without a doubt has become one of the great capitals of mixology in the world.

With each step, the bar at Four Seasons has consolidated its position in the local and international scene, and now the fruits of that effort are shown with a nomination for the Spirited Awards by Tales of the Cocktail, an annual festival where the most renowned members of the industry gather and now recognise the effort Fifty Mils has made by selecting it as one of the four finalists in the category of Best International Hotel Bar.

Spirited Awards by Tales of the Cocktail nominates each year the best bars, bartenders, spirits and projects from all over the world that set the highest standards in the industry and have become an important reference and influence on the trends of mixology; this year, the turn was for Mexico.

Fifty Mils has stood out during the last year for surpassing the expectations of its guests and amazing international audiences with its creations and the presentation of it cocktails. This is why it is in the short list of these awards, compared to the Oscars of the bars and spirits industry.

Since last year, Fifty Mils has proven its potential to be one of the most outstanding bars in the world, earning numerous accolades, because it got to the list of the top 10 best hotel bars of the world, now being a finalist of this prestigious competition confirms its success, making Fifty Mils a world class reference in mixology.

The Spirited Awards ceremony will take place on July 21, 2018 in New Orleans. Fifty Mils, along with its competitors and renowned bars including Manhattan Bar in Singapore, and Punch Room and The American Bar in London, will compete to be The Best International Hotel Bar 2018.